Preparing for Your Next Company Meeting 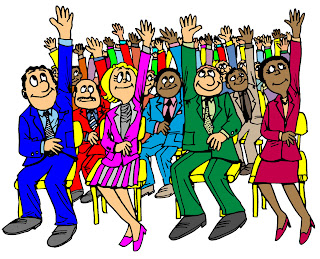 Here are some important ideas to consider when you’re in charge of putting on a meeting for your associates, customers, distributors or other people outside your organization.  Not all these suggestions will apply in every case—so just pick out one or two to start with, and use it at your next meeting!
Your Invitation   Sell the end result in the invitation. “When this meeting is over you’ll leave with…”  Tell them the objective for the meeting. “The entire focus of the meeting is…”
Your Agenda Print two different agendas—one for your audience and another one for your presenters, the AV staff, the facility and your support team!
The Audience Copy Only show the times they need to know—when the meeting begins and ends (if necessary). If it’s a half-day meeting and you’re providing lunch, avoid saying on the agenda “Closing Speaker & Lunch at 12:00pm.” Just say instead, “Closing Speaker followed by Lunch.” That leaves you a cushion if you’re late! When you show the audience exact times for each speaker they keep checking their watch. “Hey, Nick is 22 minutes over.” Or, “Why did Chris only speak for 11 minutes, she had 20 minutes on the agenda …what did she leave out?”
The Actual Time Agenda This is only for those who must know real times. Make it very specific and leave yourself “cushion time.” Put in 5 minutes here and there to cover housekeeping announcements and the unexpected. Remember, if you end your meeting a little early, your audience will be thrilled! End right on time and you’re a hero. Run late, you’re seen as being unprofessional.
Breaks  Here’s the rule of thumb: People need a bathroom break within 90 minutes of breakfast, especially coffee drinkers, so your first break in the morning should be within the first 90 minutes of your opening. After lunch, you need more frequent breaks, so after 90 minutes, have a break, then 75 minutes, then a break, and finally, 60 minutes and then close!
Distance is Death!  Too big a room, with the audience too far away from the speaker and each other, deadens and depletes the audience’s energy. Keep people close.
Visuals Must Be Visible!  A washed out screen, caused by lights above it or directly on it, causes the visuals your audience needs to see to be weak and unappealing, taking away the impact.
Neck Twisting No-No!  Having a screen in the corner of the room away from the speaker disconnects the audience from both the speaker and the visuals. Keep the screen (or screens) close to the speaker so the audience can see both at the same time – without neck twisting!

Leadership based on instilling confidence

Just before Thanksgiving Day last year, Judy (my wife of 47 years) and I flew to  to attend a birthday party. There were no candles on the birthday cake, yet there were lots of kids at the party. The house was packed with family to honor Vernon Cavill, the birthday boy. OK, at 85 years old maybe “boy” is a stretch. It was a frigid cold November day in —yet just the day before, was out playing golf. He was still fit, friendly and fond of every living soul he ever met. That’s why Judy and I went to his party—to tell him how much we loved him.
Who’s this old guy anyway? You probably don’t know him and most likely never will, and that’s too bad. Because for the 40+ years I’ve known him, not once did I ever hear anyone say a bad word about Vernon Cavill.
When I met him over 40 years ago he was just my Sales Manager and I was a first year ex-construction worker, with no formal education, shy and self-conscious. Oh, we were also expecting our first baby, we were broke, and I was scared to death I'd never amount to anything.
Do you remember a time in your life when you felt frightened? Uncertain of your future? Lacking in self-confidence? Most people have times in their lives when they are doubtful, fearful or unsure of themselves. In fact, someone you know right now might be in that position. They might need the help of a Corporate Angel—like .
had called a sales meeting to kick off a three-week sales contest and over a hundred of us attended. To motivate its sales force, the company said that any person making ten sales in a three week period would earn their choice of wristwatch. I had a pocket watch from my construction days, but never had a real business looking wristwatch with a stretchable band. I was excited. I was motivated. And I was going to get myself a watch!
As the meeting closed and people began leaving, Vernon called me over and said: “Well what do you think Joel, will you earn a watch?”
"Oh, yes, sir."
“Good, which one do you like?”
"Oh, that gold-plated one with the stretch band."
“Good,” he said. Then he paused and said: “I know you can get ten sales.”
“Thanks for the support” I said.
As I was leaving, he said: “In three weeks come and see me and tell me how you did.”
Oh, boy, now I was really on the spot. I had made a commitment and was going to hold me accountable for my performance. I was motivated, enthusiastic, goal directed, had a deadline and was excited about the end result. I worked long and hard. I felt I did everything I could to achieve my goal, and yet I failed. Now it was time to face . He welcomed me with his glowing angelic smile and softly said: “How did you do?”
“Not good enough,” I said sadly. “I only got eight.”
Without changing his tone or his mood, quietly said: “Let’s go over your activity and results for these three weeks. Show me what you did and tell me about the eight sales you made, and about the other presentations you made but didn’t sell.”
It seemed like I was on trial for my life—oh, not because he was judging me, but because I was judging myself. I could see where I went wrong and where my lack of product knowledge, qualifying skills and ability to answer customer objections was lacking. After what seemed like hours (it was actually about 30 minutes) Vernon leaned back in his chair and said the words that helped me alter my life. Yes, his action was life changing to me.
Before I tell you what he did, come to his birthday party with me 40 years later. I was reminding him why I so loved him and respected him. "It was because of the lesson of the watch," I said. smiled that angelic smile and said: “What watch?”
“The gold-plated watch—when I first worked for you, Vernon.” At 85 years young, was he losing his memory? No, he wasn't. He just never stored the memory of that brief meeting with some young sales guy who was one of just hundreds he’d been responsible for years ago. He had no memory of the watch contest, our meeting or what he had done that changed my life when he leaned back in his big leather chair and said....
Wait!  You finish the story!
You’re right. didn’t say that! So did he say…
That would seem to be an angelic approach, and very realistic for to do. But he didn’t do that either! What he did was life changing and will remain with me forever.
He said: “Joel, I know you worked hard these past three weeks and I sense your disappointment. You made eight and that’s the most you've ever sold. But I know you can sell ten in three weeks! So here’s what we’ll do. Starting today you and I will have our own contest. You get ten sales in three weeks and I’ll get you that watch—OK?” And we shook hands.
Well, I didn't get ten sales, I got twelve! And of course, he gave me the watch. It’s been in my desk drawer for quite some time now. It doesn’t work and the band is all rusted. So why do I still love that watch? Because of what it symbolizes---the power of belief had in me—when I didn’t even believe in myself. From that time on my confidence soared! My attitude became so positive. I was on fire! His "wisdom of the watch" helped me become, by year end, the number one salesperson in his entire operation, and a lifelong friend as well.
Here’s what you can do:
Posted by Joel Weldon at 12:14 PM No comments: